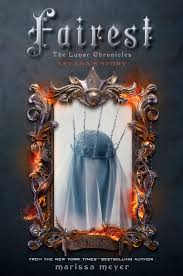 In this stunning bridge book between Cress and Winter in the bestselling Lunar Chronicles, Queen Levana’s story is finally told.

Mirror, mirror on the wall,
Who is the fairest of them all?

Fans of the Lunar Chronicles know Queen Levana as a ruler who uses her “glamour” to gain power. But long before she crossed paths with Cinder, Scarlet, and Cress, Levana lived a very different story – a story that has never been told . . . until now.

Marissa Meyer spins yet another unforgettable tale about love and war, deceit and death. This extraordinary book includes full-color art and an excerpt from Winter, the next book in the Lunar Chronicles series. (Synopsis taken from Goodreads)

You have to admit, we’ve all been curious to find out more about Levana, and what’s behind her veil. We find out in this book, which travels from when she was fifteen to five or six years after she “killed” Princess Selene.

You get introduced to Levana’s older sister, Channary, who’s Cinder’s mother. Channary is everything Levana doesn’t want to be…yet ends up as anyway. Channary is cruel, selfish, and vain. The only difference is that Levana is quite a bit smarter than her sister.

You also see how Levana’s downward spiral wasn’t brought about by hate or loss or jealousy…it was brought about by love. The love for one of her guards, Evret. Who happens to be already married, to a beautiful, very pregnant seamstress named Solstice.

Most of all, Levana just wants to be wanted, to be loved. And, unfortunately, as much as she loves Evret, she doesn’t get that love in return. She’s so used to being looked over, that she wants to be in the spotlight for once in her life.

This book, while engaging as the others, is missing the bits of humor we’re used too from Cinder, Scarlet, and Cress. And, unlike the other three heroines, Levana isn’t instantly likeable. You will feel sorry for her…but you won’t like her, especially as the book goes on.

There are also little cameos of Cinder, Winter, and Jacin Clay, who played together as little kids. I couldn’t help grinning whenever they were mentioned, and I wish there had been more of them in the book.

This is a relatively short read…a little bit less than three hundred pages, but that just makes it easier to finish if you have a busy life. All in all, this is a fascinating, compelling prequel that just makes the wait for Winter seem that much longer.