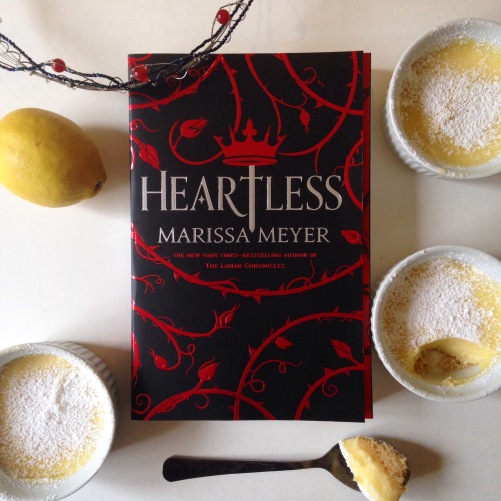 Synopsis: Long before she was the terror of Wonderland — the infamous Queen of Hearts — she was just a girl who wanted to fall in love.

Catherine may be one of the most desired girls in Wonderland, and a favorite of the yet-unmarried King of Hearts, but her interests lie elsewhere. A talented baker, all she wants is to open a shop with her best friend and supply the Kingdom of Hearts with delectable pastries and confections. But according to her mother, such a goal is unthinkable for the young woman who could be the next Queen.

At a royal ball where Cath is expected to receive the king’s marriage proposal, she meets Jest, the handsome and mysterious court joker. For the first time, she feels the pull of true attraction. At the risk of offending the King and infuriating her parents, she and Jest enter into an intense, secret courtship.

Cath is determined to define her own destiny and fall in love on her terms. But in a land thriving with magic, madness, and monsters, fate has other plans.

I maaaaay have been trying to get another book blogger friend of mine to send me this one when I got an ARC of it.
And my feelings about it? MARISSA MEYER IS AS AWESOME AS EVER.
Now, I was never really a fan of the original Alice in Wonderland. I could appreciate the weirdness and the uniqueness, but the way Lewis Carrol wrote it just didn’t work for me. I am, however, a fan of numerous retellings, though, and this one is no different.
Things You Should Know:
-I wouldn’t recommend reading this unless you’ve read the original Alice in Wonderland, because Marissa Meyer doesn’t explain the world…this book just assumes you already know it, which I really appreciated. A lot of retellings actually re-explain the world, and this one is very clearly Wonderland as in the original.
-Don’t read this book hungry. This book is full of delicious food item after delicious food item, and I spent the entire time drooling. I mean, it’s full of quotes like this:
The macaron was sweet and delicate and smooth, with just a tiny crunch from the meringue, and a subtle floral moment from the distilled rose water, all melting together into one perfect bite.
What I Liked:
-All. the. food. I mean, the book starts with Cath pulling lemon tarts out of the oven. And she thinks like a baker, too…meaning she eats something and thinks about what could make it better, how she could make it, and what worked in it. And that’s totally something that bakers do! If you eat something with me, it’s very likely I’ll say how it could use a little more of this and little less of that, and maybe add a bit of this too it.
-The characters are all amazing and have real depth to them.
-You really feel like you’re in Cath’s head, that you’re experiencing what she’s experiencing, and that’s pretty dang hard to pull off in first person, let alone third.
What I Didn’t Like:
-It was kind of instalovey. Cath and Jest locked eyes across a ballroom, and boom, attraction. Although the word “love” wasn’t uttered until a good three quarters of the way through the novel, Cath spent a lot of her time thinking about Jest despite not knowing him very well.
-It’s kind of slow. It felt like it could have had some stuff removed and still be fine.
-The cover. I KNOW, I KNOW, don’t judge a book by it’s cover and all, but it could have been a whole lot better.
And one thing about this book, you will feel so bad for Cath. She just wants to be a baker, but since she’s a woman, since she’s the daughter of a noble family, she is basically forced into courting the king, who she cannot stand to be around. Her choices are made for her by her mother and father, and any choices she makes herself are wrong, simply because she’s the one making them.
It is clear that her parents, the king, the other people that run in the same circles as her parents see her as a shallow, vapid ornament, a doll to hang on the arm of
the king, a future wife to wear pretty dresses and bake him tasty things. For a world that seems as if it should have no rules, it’s stifling, especially when you’re a woman and part of high society.
If you thought you’d never empathize, truly feel for the Queen of Hearts, this book will prove you wrong. Even though you know you should hate her towards the end of the book, you just can’t. And I think that’s one of the hardest things to do.
It also proves that Marissa Meyer is Queen of the retelling, as always, and this is a new book to be adored.
HEARTLESS COMES OUT NOVEMBER 8TH, 2016. QUOTES ARE TAKEN FROM AN ADVANCED READER COPY AND MAY NOT BE IN A FINAL EDITION.

SO, blogglings, do you adore Marissa Meyer as much as I do? Do you want to read this? Where you lucky enough to score an ARC of it (I won a contest!)?
And, as always, will any other Seattle bloggers be at the book launch? I will, and I’ll most likely be wearing a red skirt and a macaron hat.
Happy Sunday,

8 thoughts on “Heartless by Marissa Meyer | ALL THE DELICIOUS FOOD”