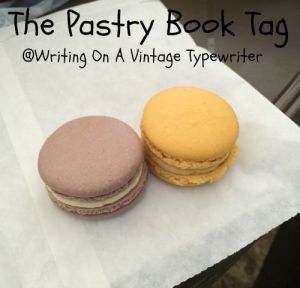 So, remember how I kidnapped The Coffee Book Tag and stole the Bookshelf Tag? (I was actually tagged for the Unpopular Opinions tag). Well, I mentioned that instead of going to blogs and snatching the tags from them, I should create my own. Y’know, to make up for it.

There are no special rules (mostly because I’m too lazy to make them up). Just give me credit for it, I guess.

If this tag stinks, feel free to tell me.

Croissant: Name a popular book or series that everyone (including you) loves.

*sings* Harry Potter. If you don’t love Harry Potter, we need to have a talk about your life choices. Because seriously, how can you not like Harry Potter? J. K. Rowling is the queen.

Macaron: Name a book that was hard to get through but worth it at the end.

I struggled through the first third or so of Welcome to the Dark House, but I’m glad I kept going because the ending was worth the initial struggle. (Plus, I’m dying to know: how many people have attempted to make macarons only to have them turn out hollow or crunchy or not have those little feet. Because I have. Many times)

Vol-au-vent: Name a book that you thought would be amazing but fell flat.

(For those wondering, a Vol-au-vent is a flaky pastry that’s hollow inside. And also is delicious). Judging by what I had heard about it, I would say Shatter Me by Taherah Mafi. Everyone told me it was amazing, and I was expecting a harsh dystopian, but what I got was a romantic X-Men rip off.

Pain au chocolat: Name a book that you thought would be one thing but turned out to be something else.

I was fully expecting The 100 to be sci-fi post-apocalyptic, but instead it was bad romance.

Profiterole: Name a book or series that doesn’t get enough attention.

Either the Scorpio Races by Maggie Stiefvater, Half Bad by Sally Green, or the Dorothy Must Die series by Danielle Paige.

The Mortal Instruments series by Cassandra Clare. She foreshadows three books in advance, each book has the main plot plus each of the characters have their own little subplots and sometimes those subplots have a subplot plus there’s the plot that encompasses the whole series and at times I felt like my brain was going to explode.

Napoleon: Name a movie or TV show based off a book that you liked better than the book itself.

I liked The Maze Runner movie better than I liked the book, and The 100 TV show it ten times better than the series. Way more violent, too. I spent like the entire first season cringing.

Empanada: Name a book that was bittersweet.

Really, empanadas are savory-sweet, but that doesn’t sound as good. As for bittersweet, I’d say Eleanor & Park. I have this wish that sometime in the future Eleanor and Park get together again and get married. Seriously, I love them.

Kolompeh: Name a book or series that takes place somewhere other than your home country:

The Daughter of Smoke and Bone series takes place in Prague, which sounds beautiful and they also have amazing pastries. I think it would be a little bit of a struggle to visit because I don’t know one word of Czech.

Pate a Choux: Name one food from a book or series that you would like to try.

Ambrosia from the Percy Jackson series, mostly because I have no idea what my favorite comfort food is. But if I burst into flames after trying it, I’d say the Fizzy Lifting Drink from Willy Wonka and the Chocolate Factory. Provided I can get down again.

Cait @ Paper Fury | Tina @ Read the Bloody Book | Aentee @ Read at Midnight | Erika @ Erika in Bookventureland | Cat @ Thoughts from a Geek Girl | Lizzy @ My Little Book Blog | Koral @ The Time Traveling Writer’s Blog | and anyone else who wants to do it! Give me a link and I’ll come check it out.

So, how’d I do? Is my book tag decent? And, most importantly, did it make you crave pastries? I want a profitarole now. Also, in a show of hands, who else thought that a pain au chocolat was only just a chocolate-filled croissant and not something completely different? I did for the longest time, and it’s a bit embarrassing.

21 thoughts on “In Which I Create The Pastry Book Tag”